“You gain strength, courage and confidence by every experience in which you really stop to look fear in the face. You are able to say to yourself, 'I have lived through this horror. I can take the next thing that comes along.'

What Does The Fox Say?

If you ask my three year old grandson Grant, WHAT DOES THE FOX SAY?  Depending on his mood; he will most likely shake his "bootie" and sing "Ring a ding, ding, ding, ding ,ding a ding ding. His imitation of the Danish pop duo Ylvis is spot on. The lyrics are catchy and he is adorable singing it...a true musical genius.  (At least to us he is.) So of course I had no choice but to make him a fox hat for these chilly Spring days, 'cause that's what I do.  (Some of you will remember the owl hat debacle. He hated it and refused to wear it. It was scratchy and It scared him. I can't say I blame him.) Being the eternal optimist I hoped for better luck with this one.  So back to the stash I went. Thankfully the pile of unused yarn seems to be shrinking a bit since my commitment to finish things.  Low and behold, I found a skein of soft, rust colored yarn. I don't remember now what I bought the yarn for or how long I have had it but it was perfect for this project. Because my grand-son lives in New Hampshire and we are in Massachusetts, I put the hat in the mail. Grant loves to get mail so I knew he'd be thrilled to get the package and he was..... until he saw it, and my daughter asked him to put it on that is. Well, as luck would have it Grant wasn't "in the mood" so like any good mother my daughter bribed him so she could get a picture of him wearing it to show me. And like any good toddler he took the bait.
Here is Grant reluctantly posing for a quick snapshot in exchange for the promised handful of M & Ms.
I'm told he hasn't put it on since and even down right refuses to wear it.
Oh well... 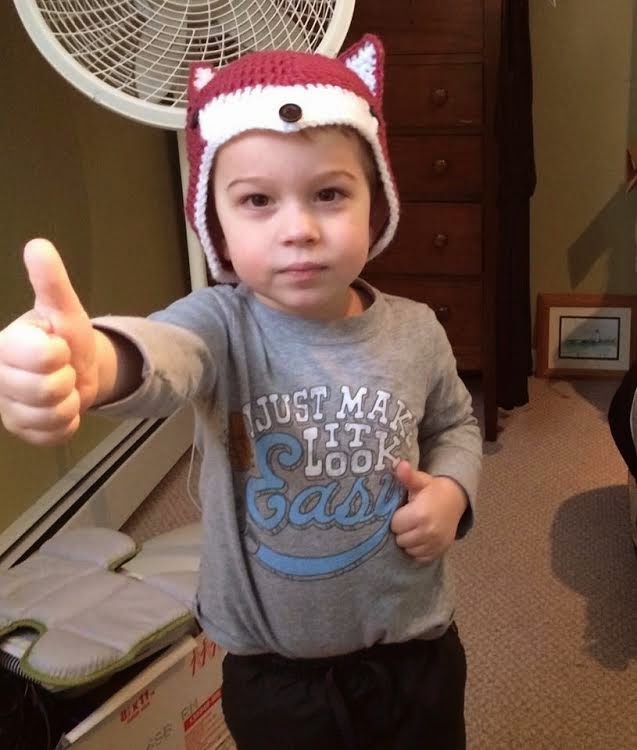 Hi, I love the hat you made your grandson and I'm so surprised that he hasn't worn it since. Oh well maybe he'll wear it again sometime. You did do a good job making it! I hope all is well with you.
Julie

The Oak and the Acorn

I am a habitual procrastinator just trying to get it all done. But I am a hopefull Optimist. I'm a Runner, a Writer and a Blogger. I love to Knit, Crochet and Create. I love to Read. I am also a Daughter, a Sister, a Mother, a Grandmother and a Wife. I can't help routing for the Underdog. I'm just trying to figure it all out like everybody else.